There is extensive evidence indicating that oxidative stress induced by ROS plays an important role in the process of human skin aging. Mitochondria are the major source of cellular oxidative stress and are widely implicated in cutaneous aging. ROS attack and react with stable skin cell molecules, causing cross-linking of collagen and elastin (the cause of wrinkles) while lessening skin’s ability to repair itself.

External stressors such as ultraviolet radiation (UVR), pollution and lifestyle factors are also stimulators in the production of ROS and generate oxidative stress.

mesoInstitute anti-ROS solution/09 is an anti-radical formula to slow cellular aging due to oxidative stress by reducing cell-surface oxidase in skin, skin appearance was improved through decreased protein cross-linking and an accelerated increase in collagen. Also prevents hyper-pigmentation intrinsic or photo-induced.

For women and men of all ages. 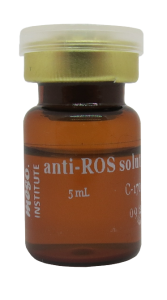 For external use only. Do not apply to broken or peeling skin. Immediately rinse with water and discontinue use if excessive redness or irritation occurs. Do not store once open. Keep out of reach of children. Open carefully. Avoid contact with the eyes.

All products are dully registered as a topical cosmetics. The manufacturer or distributor are not responsible in any case of any kind of damages caused by third parties or adverse effects.