Polyhydroxy acids penetrate the skin gradually, layer by layer. Due to this fact, their use in peel treatments does not cause strong burning sensation and irritation of skin.

Lactobionic acid is a mild exfoliant that smoothes and resurfaces without causing irritation or redness. Thanks to minimal irritative effect, it can be successfully performed even on sensitive skin that is prone to acne.

It has gradual skin penetration. Lactobionic acid has considerable molecular mass and consists of relatively big molecules. As a result, it penetrates skin gradually, layer by layer, which is less damaging than peels performed with glycolic or lactic acids. Thanks to gradual penetration, lactobionic acid does not cause severe burning sensation during the treatment or complications after the peel.

It has high biocompatibility with human skin. Skin easily adjusts to the lactobionic acid; when all stages of the chemical peel are performed properly, no severe flaking, itching, or hyperemia occur.

Lactobionic acid can function as a link between iron ions, providing strong antioxidant effect. It removes free radical intermediates and protects skin from dangerous UV radiation. Lactobionic acid inhibits matrix metalloproteinase, which are the main cause of skin aging. They destroy the major components of the extracellular matrix of the skin, collagen in particular, causing elasticity loss, deep wrinkles and a sagging face.

Acne is reduced, thanks to deep cleansing combined with smoothing and anti-inflammatory properties, reducing the amount of pimples and blackheads.

Capable of being used at any time of the year. 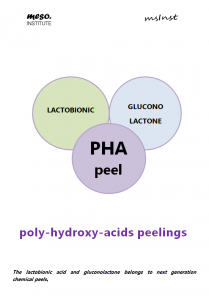 For external use only. Do not apply to broken or peeling skin. Immediately rinse with water and discontinue use if excessive redness or irritation occurs. Keep out of reach of children.

All products are dully registered as a chemical exfoliant. The manufacturer or distributors are not responsible in any case of any kind of damages caused by third parties or adverse effects.